Small groups of professionals from the non-profit organization the Thought Field Therapy Foundation* have made seven trips to Rwanda, beginning in 2005, teaching community leaders to heal themselves and then to train others in their communities to heal themselves using TFT. This method involves tapping meridian points in a particular sequence while thinking about upsetting memories and emotions. Funding for various TFT deployments to troubled areas has been provided in part by grants from PepsiCo Foundation and the Ruth Lane Foundation.

PTSD is by no means limited to Rwanda. Health systems struggle to restore services and mental health resources are scarce in countries recovering from climate catastrophes, war or genocide because their infrastructures are broken and nations struggle to regain stability. Without individual and group counseling, trauma survivors frequently continue to endure the symptoms of trauma, often with intensifying pain (Ehntholt &Yule, 2006).

Without treatment, do survivors heal? With time, can survivors just “tough it out”? The news is not good. Research from 1980 to 2005 confirmed that for many, PTSD persists long after traumatic events have passed. While some survivors get better, others do not. Many even get worse and they and their families feel desperate and alone (Galea, Nandi & Vlahov, 2005).

To make things even worse, research confirms that when PTSD goes untreated, the effects persist and may be perpetuated from generation to generation. The children of parents suffering from trauma frequently exhibit maladaptive behaviors and severely damaged self-esteem. Therefore, whether working with veterans, civilian victims of war, survivors of child abuse, urban violence or natural disasters, we have one more compelling reason—the next generation—to identify the victims and deliver PTSD treatments on a community level (Schaal & Elbert, 2006; Wood, 2007).

It is critical that we find effective and low-cost ways to deliver trauma treatment to the many millions affected by posttraumatic stress. Every person on the planet is affected financially and emotionally by the high costs of this global mental health problem, even those not suffering directly from PTSD.

Posttraumatic Stress Disorder is not limited to veterans; it is not limited to victims of genocide, to survivors of floods, earthquakes or wars. PTSD is a global public health problem. Worldwide, it is estimated that five percent of men and more than ten percent of women suffer from PTSD during their lifetime (Kastrup & Ramos 2007). With a world population of seven and a half billion, this means that nearly 1.2 billion people currently alive will suffer at some point in their life from PTSD.

According to the World Health Organization (WHO), mental illness will grow to be an even more devastating cause of death and disability worldwide by 2020, second only to cardiovascular disease (McLeigh & Sianko 2011). Traumatizing events contribute to this trend and consume treatment resources greater than can be provided in even the most developed countries.

At the close of the documentary film, From Trauma to Peace, a Rwandan genocide survivor, Father Augustine Nzabonimana, looks out at the audience and pointedly says, “Yesterday it was me; tomorrow it could be you.”

In the United States, a recent review of randomized clinical trials of psychotherapy for military-related PTSD concludes that there is a need for the testing and development of novel, evidence-based treatment for addressing this problem (Steencamp, M.M., Litz, B. T., Hogue, C.W., & Marmar, C.R., 2015).

A Community-based Solution Recommended by the World Health Organization

In 2002, the WHO Executive Board met in Geneva and discussed the question “What can be done?” They announced support for seeking out and developing new programs to address the psychological damage of natural disasters and war. In 2003, the WHO Department of Mental Health recommended more community resources—speciffcally, the education of community leaders in core, psychological care skills as part of the solution. The WHO Inter-Agency Committee issued guidelines for implementing such programs (Ghosh et al., 2004). 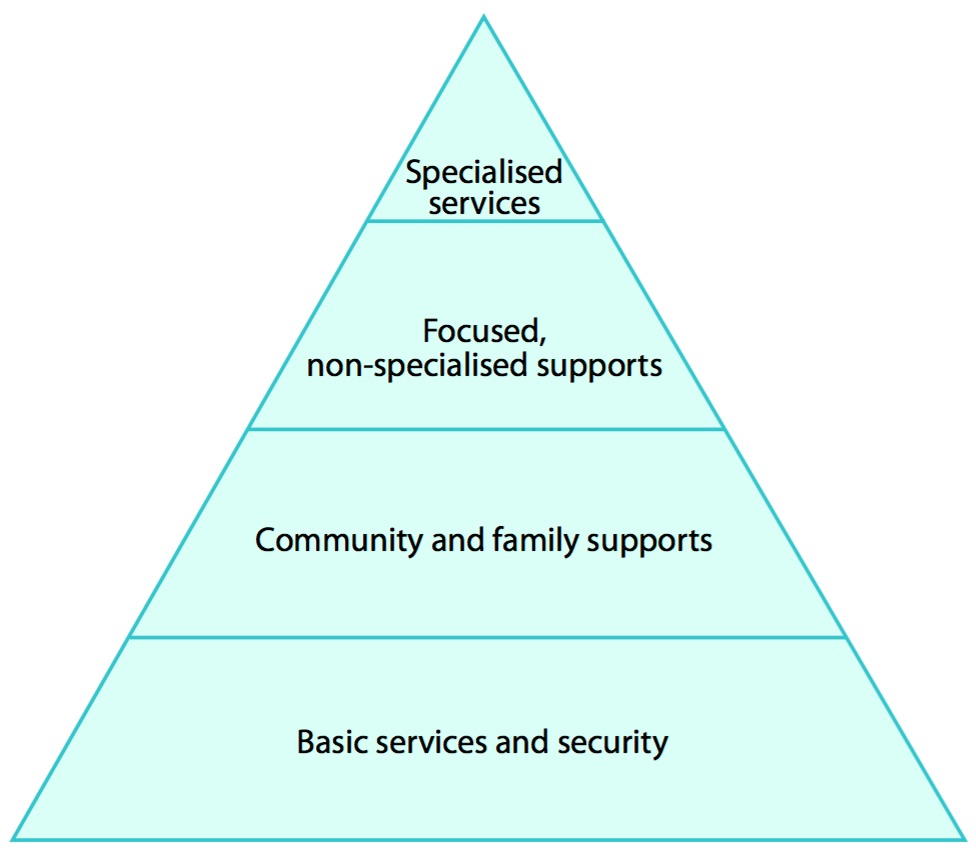 This all sounds good in theory, but guidelines alone are just not enough with millions needing treatment and with professional resources scarce or non-existent. As a world panel of trauma experts explained: “The scale of recent disasters and. . . mass violence also underscores that [mental health] interventions must be available to large numbers of individuals, at levels that quickly outstrip the available individual-level therapists who are local or may be dispatched to the region” (Hobfoll et al., 2007).

Today, in the Byumba area in the Northern Province of Rwanda, a full-time clinical psychologist, Adrienne Nahayo, staffs the ATFT/Izere Rwanda Office at the Izere Community Center and receives people for TFT treatment throughout the week. Ms. Nahayo and part-time social worker Betty Mukamurara, often make trips into the rural community to treat people who cannot make the trip to the ATFT/Izere Community Center. Since their trainings in 2009, when TFT first came to Izere Center, Adrienne Nahayo and Betty Mukamurara and other Rwandan TFT therapists working through the Izere Center report treating between 150 and 200 persons per month.

In 2009, a large group of TFT-trained Rwandan community leaders also began a tradition of meeting four times a year at the ATFT/Izere community Center where they teach large groups of community members, using TFT. Several hundred persons living in this rural area of Rwanda are relieved of their psychological problems each time they meet.

On a larger scale each year in Rwanda, April is set aside as the month of mourning for losses that occurred in the genocide. During the memorials, survivors stand up and testify to the horrors they endured in 1994 where almost one million persons lost their lives.

It is common that attendees are triggered by these testimonies and become re-traumatized. Red Cross workers stand by and medicate them with injections of tranquilizers and ambulances stand by, ready to take those who become hysterical to hospitals.

In the past few years, Red Cross workers have begun inviting the TFT-trained Rwandan community leaders to participate in these memorials. Rev. Celestin Mitabu, a Rwandan TFT trainer and TFT teacher since 2008, has developed a system of procuring three rooms for those experiencing this intense re-traumatization.

Red Cross workers bring those at the commemoration who are hysterical to one room to be treated by a team of TFT therapists. They bring those who are upset and re-traumatized, but not hysterical, to another room to be treated by the Rwandan TFT therapists. A third room is reserved for those successfully treated with TFT, so they can relax peacefully and regain physical strength before going home.

Rev. Mitabu reports that the Red Cross brings people to be treated by the Rwandan TFT therapists, and brings bottled water to the therapists and those being treated. Rwandan therapist, Prosper Ishimwe, reported that no one had to be medicated or taken to the hospital at the commemorations when he was working there with Rev. Mitabu.

Research Validating the Effects of the TFT Interventions

The Rwandans Continue the Work

The Thought Field Therapy Foundation has responded to areas hard hit after natural and man-made disasters throughout the years. Various TFT Foundation members have responded to invitations to teach TFT to professionals connected with Columbine Connections after the shootings at Columbine High School; treat displaced persons in Tabasco, Mexico, after the serious flooding in that region; and treat and train in Haiti after the earthquake. They have gone to New Orleans three times by invitation to treat medical professionals at Charity Hospital and to train at other hospitals in Louisiana after the floods, to Japan after the great earthquake and tsunami, to Tanzania after the Embassy bombing and more.

In the face of the enormous problem brought about by trauma, it is helpful to know that there is a model of teaching an effective and efficient way to alleviate trauma, even when it happens on a large scale such as in Rwanda in 1994. More people can be treated, especially where professional help is in short supply, using the UN model of training paraprofessionals and using Thought Field Therapy as the intervention.

We may not be able to do everything, but that should not discourage us from doing something. It is helpful, in the face of so much to do, to remember the parable of the sea star.

A man was walking along a beach that was covered with sea stars that had washed up onto the sandy shore. As the man walked, he threw as many sea stars back into the sea as he could. Of course, he made only a small dent as there were literally thousands of starfish washed upon the shore. A boy came and laughed at him, telling him he could not possibly make a difference, because the starfish washed upon the shore were simply too numerous. The man smiled, and as he threw the next sea star back into the sea, he said aloud, “It makes all the difference to that one.

*The Thought Field Therapy Foundation can be found at www.TFTFoundation.org.