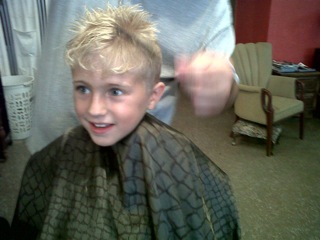 My four-year-old son Max has always been a very happy, outgoing child whom nothing can phase; nothing, that is, except getting a haircut or getting his fingernails or toenails cut.

When he was a baby, my husband would literally have to hold him down while i cut his nails, and he would be screaming the entire time. Not only was i afraid that i would traumatize him for life (clearly something already had, but we had no idea what it was), but i was half-afraid that someone would hear the screaming and call child protective services on us.

When i took him to the barber shop, he would have to sit on my lap while the barber (who was very patient) used the scissors or the clippers. He alternated, hoping that something would make the experience less traumatic. During every hair cut, my son would scream and i would cry. it was horrible.

We tried different barbers, different places, and were told by one barber END_OF_DOCUMENT_TOKEN_TO_BE_REPLACED