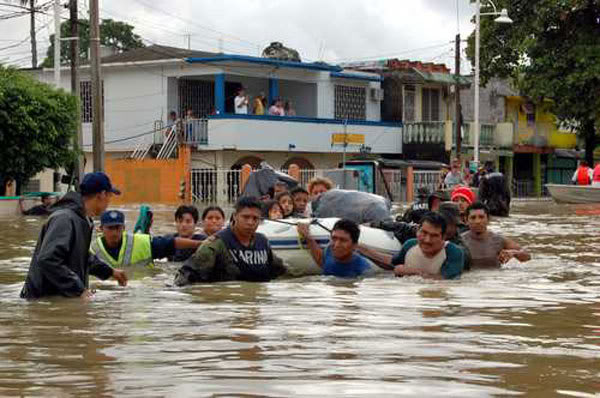 In this article from “The Thought Field”, Vol. 15, Issue 1, Ing. Alvaro Hernandez, TFT-Dx, describes the devastation from flooding in 2007 in Tabasco and Chiapas, Mexico–and the relief given through TFT by many generous practitioners and trainers, sponsored by the ATFT Foundation:

Climatic changes are affecting many Countries, and some of these changes are causing a tragedy for many people, especially the poor and needy.

Tabasco is a state rich in natural resources; it has the largest rivers in Mexico, beautiful large forest and rich oil fields. Its population of about 2,200,000 people is integrated with people from different social and economical levels, but most of them are poor.

At the end of this year, an extraordinary rainy season caused the big dams that hold the water from the mountains to produce electricity, to overfill. It was necessary to release the dams in such massive amounts of water that not only the small communities downstream, but also the City of Villahermosa (surrounded by the Grijalva and the Carrizal rivers), were flooded.

The total affected people was about 1,200,000 persons, more than half of the population, both rich and poor people were affected. END_OF_DOCUMENT_TOKEN_TO_BE_REPLACED