Jimmy, a 10-year-old foster child, came to his first therapy session with the hesitancy, reluctance, and resistance common to this population. In an attempt to engage him, he was invited to create some pictures but stubbornly refused. I then took the pencil and started doodling upside down and unconsciously sketched a person walking a dog.

He looked at the drawing and said, “I’m afraid of dogs.” Despite having this knowledge, I asked him to tell me about it. “When I was little,” he said, “a great big Doberman pinscher attacked me. He bit me on the inside of my leg. I went to the hospital and got stitches. I looked at his eyes and saw that he was mad and hungry. I ran but he got me.”

Jimmy was asked if he wanted to overcome his fear of dogs. He excitedly wondered if his fear could really be removed. I told him we would give it our best shot. When asked to rate his fear of dogs on a scale of one to ten, he forcefully said, “A million.”

The trauma treatment algorithm was then applied with rapid success. Jimmy delightfully and insightfully remarked, “I know why you had me hum happy birthday. Because I’m happy I don’t have fear anymore.” 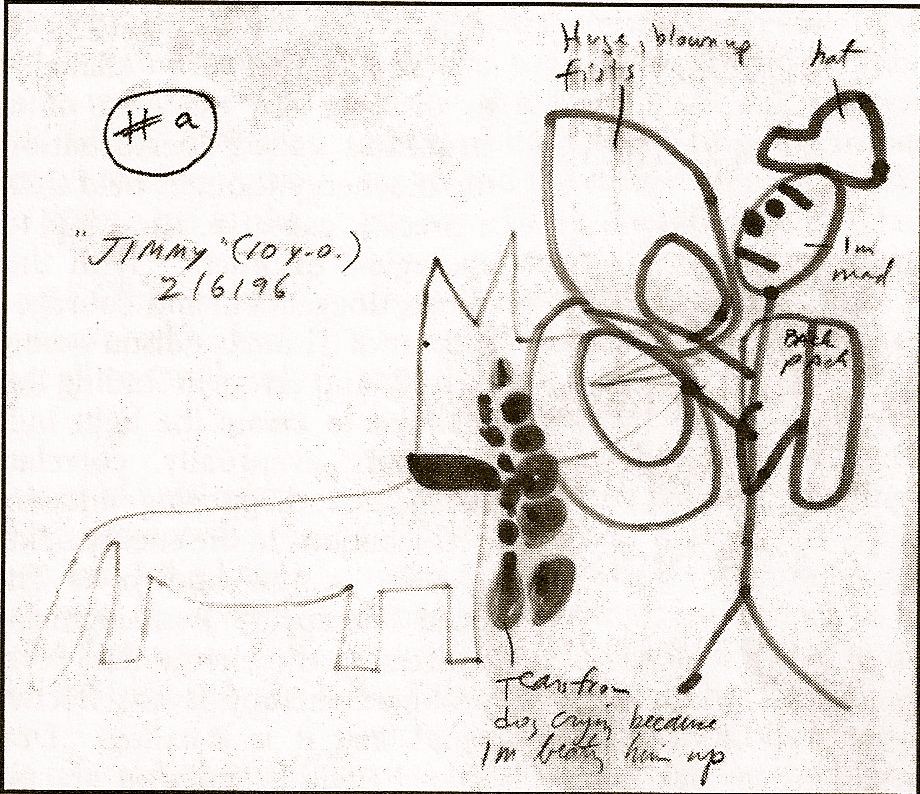 He impulsively grabbed a pencil and started drawing [see #a], saying: “I’m going to draw me beating up a dog. He’s crying. The dog had big tears because I beat him up with my big blown-up fists. I be mad at him just for biting me. The kids are saying, ‘Look at Jimmy beating up that dog’.”

Jimmy was then given the following instructions: “Draw a dog before you lost your fear.” 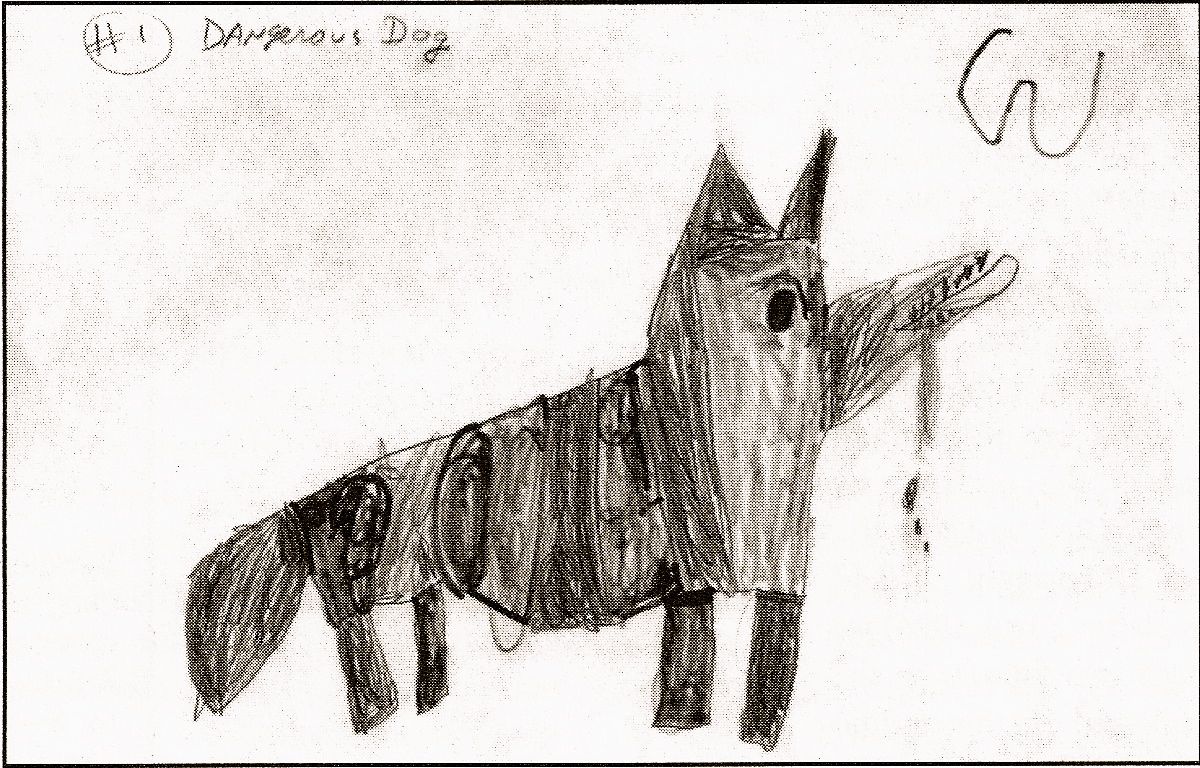 He drew the dog with a pencil and three markers: brown, green and black. [see #1] His affect and lively verbalizations communicated the terror of the attack. “That dog was mad and mean. He was growling. His eyebrows are big like that because he’s mean. His eyes are green because he’s mean. Those are spots of brown, like paint spots. He was drooling, too. Drool is comoing from his mouth.”

I asked Jimmy what the dog was thinking. He answered: “He’s going to eat me or bite me. As soon as he saw me, he started drooling. He’s got sharp teeth too. That’s how all Doberman Pinschers are, with brown and black. I’m telling you, that Doberman Pinscher was real mean. I’m glad you weren’t there because he would have bitten you too. Both his ears are black. His mouth is black. He just bit me and didn’t eat me up because he wasn’t that hungry. Know why I gave him lots of sharp teeth? Because he’s so mean.”

Jimmy then began taking a parallax view of the Doberman, illustrating the dramatic and rapid cognitive shift associated with TFT. He said, “It would be real funny if he stopped chasing me and put on his top hat and tuxedo and started dancing with his cane and singing. He gets on his two legs and starts dancing and singing. Then I’d go in my house and watch him outside dancing with his cane and top hat.”

Discussing the event brought back some of the trauma. Suddenly Jimmy’s affect changed. He sadly said, “I don’t know if my fear is gone. I think I’m afraid of dogs again.” The TFT algorithm was immediately re-administered with positive resolution of the trauma. He reported feeling good and was asked to draw a picture illustrating his current feeling about dogs. 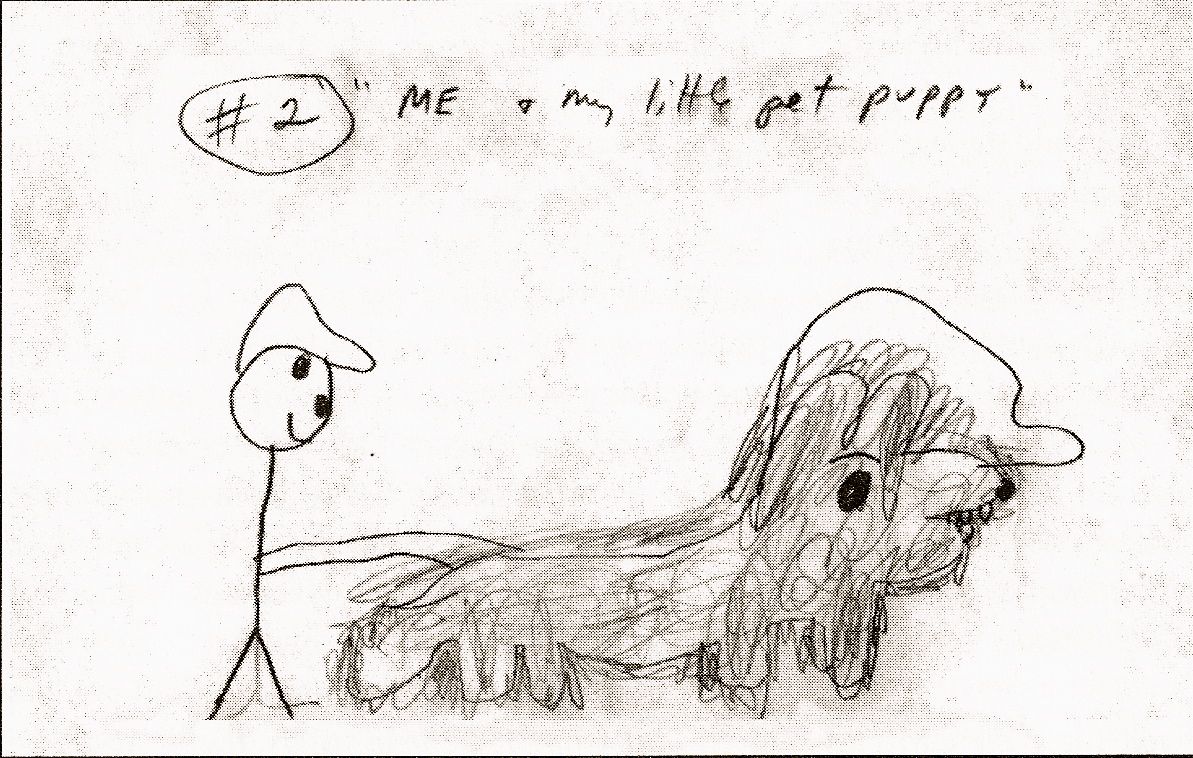 As he drew [see #2] , the following statements spontaneously emerged: “Now I’m drawing a puppy. This time his ears are round because he’s a little baby puppy. He is fluffy with little round ears and his mouth is round and his paws are round and his tail is really fluffy or furry. It’s a fluffy or furry little puppy, like a little fur ball. This one’s happy, a little furry puppy. I’m going to draw myself as a stick figure petting him but I’m bigger than him. I’m petting him with both hands. I am tall but I’m drawing myself small in this picture because if I draw myself big, my arms won’t reach the pupy. But I’m really tall and big. I’m really big here and the puppy is small and I’m happy. I’m giving him a baseball cap but it’s big so it can fit him. He’s got round teeth, not sharp ones. If he had sharp teeth I’d be scared, so I give him round teeth.”

In this intervention, Jimmy gained immediate relief from his phobia of dogs.