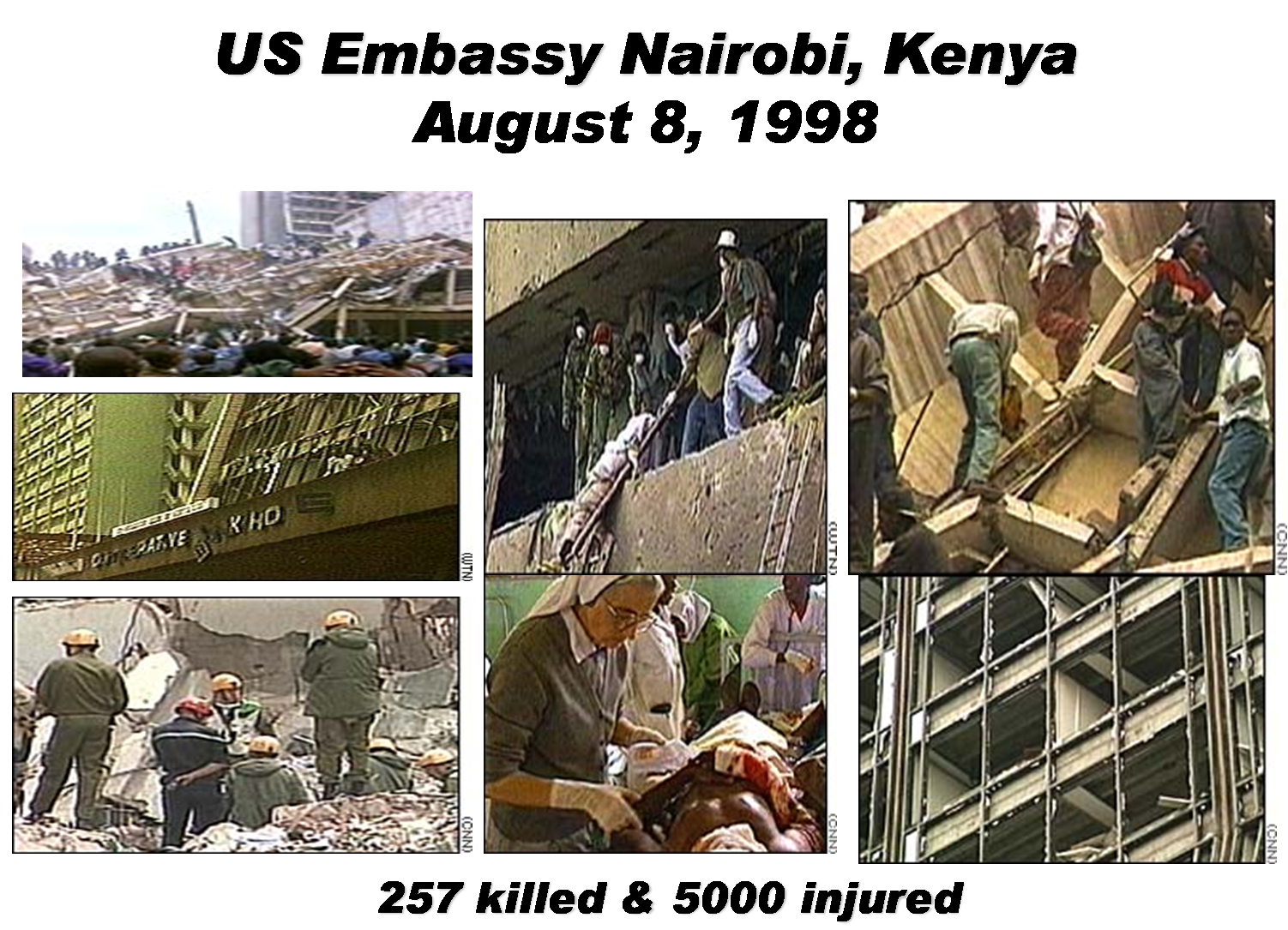 Jenny Edwards, Ph.D., TFT-Dx, discusses how she–and TFT–were in the right place at the right time:

When I first heard about Thought Field Therapy, I knew that I wanted to learn it for my work in Africa. I give seminars there, and thought that people there would benefit from knowing a rapid way to eliminate trauma, physical pain, anxiety, addictions, phobias, and all of the other areas that Thought Field Therapy addresses. I didn’t know just how much it might be needed.

In July, 1997, I received an invitation to conduct a two-week training sponsored by the Carmelite Community in Nairobi from August 3-14, 1998. I would be working with priests, nuns, brothers, students, counselors, educators, social workers, and others involved in helping professions.

I accepted with pleasure, and made plans to teach a number of topics that had been requested, as well as a section on Thought Field Therapy.

The bombing of the U.S. Embassy in Nairobi occurred the morning of Friday, August 7. We were in the training at the time, which was about 25 minutes away from downtown Nairobi. Only during the afternoon did we begin to realize the devastation and the extent of the bombing.

We were just getting into the training, as it was one of several topics being addressed in the two-week seminar. They reasoned that, after all, people had just been in a bombing. Surely Thought Field Therapy wasn’t powerful enough to help people with trauma that severe. I knew that I had to and wanted to go to the hospital and work with bombing victims.

The Sisters were going to the hospital after the training was over at 1:00 PM, and agreed to take me with them. As we went through police road blocks on the way there, I began to realize the severity of the situation.

We arrived at Kenyatta Hospital and went directly to the wards. Doubts began to surface. Sure, I knew that Thought Field Therapy worked; however, these people had been in a bombing the previous Friday. Would it work with them?

As I followed the Sisters from ward to ward, I asked myself questions like, “Who do you think you are?” “Fools rush in.” “What if it doesn”t work?”

In many of the wards that we visited, people’s faces were filled with stitches. Eyes were bandaged. It would be unthinkable to ask them to tap on their eyebrows and under their eyes. [Note: In such cases there are equivalent points on the toes. RC]

We went from ward to ward. The Sisters seemed to know what to do. Obviously, they had done this before. I thought I would just follow them around; however, I was praying and asking for direction. With whom, if anyone, should I use Thought Field Therapy?

We finally came to a ward in which people had mainly lower body injuries. I went up to a woman lying on her bed, staring into space, and began talking with her. She was in a great deal of pain – a “10.” Her shoes had been blown off by the bombing, and she had walked out. She had a lot of glass in her feet, among other injuries, and was on strong pain medication.

Since her injuries weren’t quite as severe as others, the doctors hadn’t had a chance to work with her yet. After building rapport, I said timidly, “I have something that MIGHT help you. I’m not sure if it will work. It would involve tapping on these particular places on your body (I showed her), and would take about five minutes. I’m willing to try, if you would like me to.”

She said, “I’ll do anything. I’m in so much pain. I also keep thinking that a bomb will explode any minute in the hospital. I know that it’s probably not going to happen; however, I can’t get the thought out of my mind!”

I decided to work with the pain first. After tapping the pain algorithm, the SUD came down from a “10” to a “5”; however, it wouldn’t go any lower, even after tapping for reversal. It occurred to me that we needed to tap for trauma before the pain would go any lower. Of course, the trauma was a “10”, and it came down to a “0” immediately. After that, we tapped again for pain, and it readily went down to a “0”.

She blinked her eyes and looked at me, a little bewildered. She said, “I’ve played the pictures of what happened the day of the bombing over and over in my mind, almost without stopping, since Friday. It’s really strange, but I”m not doing that any more. I think that I’ll be able to get to sleep tonight.”

About that time, the Sister came to me and said, “The woman in the bed across the way says she wants to be healed, too.” I went over to her.

She was just staring into space. Her arm was bandaged, and her hand was limp. After talking with her for a few minutes, I asked her if it would hurt if she tapped on the hand that was limp. She said it might hurt a little; however, it would be worth it in order to be able to experience the changes that she had just seen the woman in the bed across the way experience. She was “10” on both trauma and pain. I decided to work on trauma first. It came down fairly quickly to a “0,” with no Psychological Reversal.

Then, we worked on the pain, which had already gone down to an “8” after working on the trauma. As she tapped, it went down to “0,” too. She was moving her hand all around, color was restored to her face, and she was smiling and laughing. I wrote down what we had done.

Her husband, who had been watching, asked the Sister if it might help his neck pain. She said, “Of course.” By now, the first woman was sitting up for the first time since the bombing, eating dinner and talking with her husband. They were smiling and laughing.

Her husband told the Sister that usually she panicked when it was time for him to leave at night because she didn’t want to be alone, for fear a bomb might explode. He reported that this evening, for a change, she felt fine about his leaving, and told him that she would see him the next day.

She then told the Sister that she had been on extremely high and frequent doses of pain medication, and was planning to use the tapping to lessen the amount and frequency of the doses.

Then, I went to talk with a third woman in the ward. She was staring into space. I tried to build rapport; however, it was difficult. I made the determination that perhaps I wasn’t supposed to work with her.

The next day, the Sister said that the third woman had later told her, “Why did she heal the other two and she didn’t heal me?” The Sister’s response was, “She wrote down what she did for the other two. Ask them to work with you.”

The next day in the training, the Sisters shared what had happened in the hospital. People were amazed, and as I did demonstrations with people in the training around their trauma related to the bombing, they became believers and launched into the practice sessions with vigor.

Furthermore, they sent their friends with extremely difficult cases to me to work with in the afternoons for the rest of the week. I also had the opportunity to introduce TFT to therapists at a local counseling center. They were planning to follow up by ordering materials from Dr.Callahan.

Yes, I knew that I was supposed to share Thought Field Therapy with people in my seminar in Nairobi. I didn’t know just how timely the training would be.