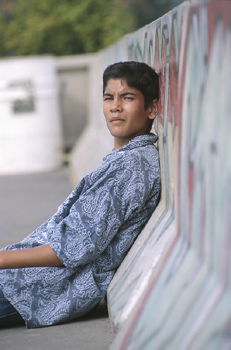 Christina Mayhew, TFT-Adv, shares how she used TFT to relieve the trauma of troubled and at-risk teenage boys:

A couple months ago I was asked to present Thought Field Therapy to 16 boys at a local home for troubled and at risk youth. These boys ranged in age from 16 to 21 years old and this was the last stop before going to a youth detention center or to another foster care.

Some of the boys came from some really rough neighborhoods. Others were in trouble with the law for various things or their home life was incredibly negative or dangerous for them.

During the day the boys were in a work program teaching them about construction and then in the afternoon and a couple evenings, they would attend school. The other two evenings were spent with different programs learning ways to deal with their anger, frustration, social skills, etc.

The new social worker was a friend of mine and when I introduced her to TFT, she couldn’t wait to have me come work with the boys. We set aside a night for me to teach them and the other social worker TFT.

Knowing most of them suffered some type of trauma and were angry and may have guilt, I decided to concentrate on the Trauma with anger and guilt sequence. [Note: this is the TFT trauma relief technique]

I wasn’t sure what to expect when I arrived. Sixteen boys in a circle with their heads hung low and looking angry to be there. I’m thinking, “What am I getting myself into?” I’m saying to myself, “Ok, I have 3 boys, two of them are their ages and one has been in major trouble, and I’ve been in the construction industry for 28 years. I do have several connections with them.”

To get things started, I introduced myself and gave them a brief history of my life, my 3 boys, dealing with my son and his antics with getting in trouble with the law, and that I owned my own construction company.

That did get a few comments like, “No way, you’re a girl!” or “What do you know about construction?”  So after a few stories of what I do and asking them specific construction questions, I was starting to gain their trust and respect.

After about 20 minutes of construction talk and asking them what they’ve learned so far, half of the room started loosening up and at least paying some attention. The others just sat there looking very agitated that they had to be there.

Next, I gave them some inspirational stories about various people overcoming hardships in life to become great at making their dreams come true. I told them they may have been given a bad hand in life yet they had the power to change that if they chose.

I had a deck of positive quote cards which I walked around and let each boy pick one card. Each card had a message for them. Some were in shock that the message was on target and others didn’t understand their message.

I told them to hold onto the cards for a while and think about it because I was going to teach them some tools that would help them deal with the emotions they face in life.

I used the analogy of TFT being like tools for the contractor. A contractor can’t go to work without a hammer, nails, measuring tape, construction material, etc.

I explained that TFT tools were used to help reduce or eliminate negative emotions to help them get through life’s challenges and promote a more healthy and positive life. These TFT tools can go with them wherever they go and can be used at any time they need them.

Looking around the room I picked out one of the biggest boys to use as a demonstration of how negative emotions cause the bodies’ muscles to go weak. He stood up and came into the center of the room and I asked him to hold his arm out strong. He did.

I practically hung on his arm to show it was strong. I asked him to think of something that made him mad and then I pulled on his arm. It immediately went weak. He didn’t know what to expect and then he told me to do it again because he wasn’t ready.

By now they were showing signs of being interested in what I was talking about. I explained that having negative thoughts and emotions causes our bodies to be weak. By using Thought Field Therapy, they can reduce or eliminate those negative emotions to allow the body to stay stronger.

After explaining very briefly about how energy meridians work, I told them that instead of using needles like acupuncture, we would be tapping those points.

I taught them the anger algorithm first by walking around the room and encouraging them to do this technique on something that makes them angry.  They were looking around the room to see if the other boys were going to do it so I picked several that seemed engaged and asked them to show the others how to do it.

Finally, all the boys started tapping. I asked if anyone would like to share what they were angry about and how they felt after doing the sequence for anger. Three boys told their story about who/what they were angry with and that they did feel a little better.

I congratulated them on successfully doing the technique and gave them a “high five”. Next, I went through the complex trauma algorithm with anger. I told them to think of a time in their life that they suffered some type of trauma like losing a parent or friend, having to live in a foster home, being arrested, or being abused.

Thinking of a trauma brought tears to some and immediate withdrawal. I told them it may be painful to think about it yet the next tool I was going to teach them would greatly help them with those emotions.

Some of the boys I had to really coax to do it. They finally agreed. As we worked through the sequence, tears started flowing, their demeanor changed and I could see them breaking through their hardships.

Again I asked if anyone would share their story. A few did–and by now, instead of the boys being angry and rigid, they started to show compassion toward each other saying things like, “I know what you’re going through man, I had the same thing.” Or “My old man, beat me too when he was drunk and I wanted to kill him so he wouldn’t hurt us any more.” And “I can’t move back home either because my parents are in jail for selling drugs.”

I had more participation this time with them talking about how they felt different and didn’t feel as angry. They couldn’t believe that this weird tapping thing could cause them to feel better.

I offered to give them individual sessions if they wanted. I had about 9 boys line up to see me. I asked them to bring their positive quote card with them.

As I sat one to one with each boy, I asked them what they thought the card meant to them at that point in their life. My heart was truly touched as each poured out their moving stories.

Through those stories, I was able to get them to focus on a particular part that seemed extra troubling to them. I just used general algorithms so that they could use that sequence over and over again as they needed it.

Some had streams of tears as they finally let go of their pain. Others went from being scared and rigid to more relaxed and friendly.

Every one of them had some transformation take place. They definitely felt it and agreed they needed the release.

Each of the boys gave me a hug and thanked me for coming, which totally shocked me.ven the social worker couldn’t believe that they showed gratitude toward me since they usually are so closed and don’t show very much emotion to strangers.

This is why I give of my time even though I’m so busy because the greatest reward for me was being able to work with these boys and make a little dent of hope and healing in their challenging lives.