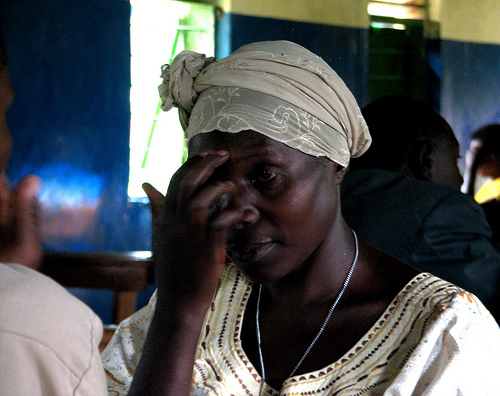 The following is an article published in “The Thought Field”, Vol 15, Issue 2, by Caroline Sakai, PhD, TFT-VT:

Suzanne Connolly and I have been awed by the magnitude of the horrors that most of the genocide survivors endured and survived, with their resiliency, courage and perseverance. The women and men who were trained with TFT at the algorithm level were very caring, and reached out with their compassion and their newly learned TFT skills to treat very severe post-traumatic stress disorder (PTSD).

It was immediately apparent that many who were the oldest child survivors in their villages that were decimated in the genocide of 1994, and who took on the responsibilities of looking after the younger survivors, never had the time or energy to grieve, to mourn, to even address or note their own feelings. They came in with dissociated states and blank stares, and said they never thought about, and did not want to think about, the genocide and had never talked about their own experiences.

Two women who had been beaten and buried alive, one for four days, saw darknes and experienced difficulty breathing as they worked through some abreactions during the trauma reprocessing.

One had residual upper right quadrant visual impairment that remained, and she had sustained severed beatings to the back of her head. Others had their pain and darkness lift dramatically with working through the trauma, rage, anger, guilt, pain, sadness, depression, fear and anxiety.

Some stricken with AIDs were sad and lonely at being ostracized by family and friends, even though their afflictions were from gang rape traumas during the genocide. Some cried at being held and touched by the women from the Women’s Foundation Ministry.

Many welcomed the physical contact and support of the treating practitioner, and when there were strong abreactions with wailing and acute distress during the trauma processing, other practitioners went over to assist and be of support.

Because of this openness to physical touching, which is so different from our restrictions and reserve in the United States, we observed a phenomena that we don’t see in our culture. When a survivor was going between waves of processing trauma and feeling overwhelmed, one practitioner could be tapping the PR point while another was tapping the trauma plus rage algorithm [the TFT trauma relief technique as described on this blog].

When a person rapidly vacillated between pain and rage and terror, sometimes they were treated successfully by 2-3 practitioners working together with the survivor. It appeared to allow the supportive grounding and centering as a safe holding environment, while the intense emotions that the survivor had never expressed before were worked through.

Many stated that they had never cried during and since the genocide, and indeed when they got into it, the traumas from 14 years ago were as if they had just happened the day before as they faced the memories for the first time.

Most expressed a profound sense of relief and release, feeling the oppression and heavy burdens they carried in their hearts and heads lift. Many were able to move from rage and resentment to forgiveness and compassion. Many with guilt were able to be more compassionate and understanding and forgiving with themselves as well.

As several of the survivors said in Kinyarwandan and French, thank you for making such a difference in our lives…they never thought it would be possible to not feel such intense emotional burdens for the rest of their lives. As the vacant stares faded, and the light went back on in the depth of their eyes, many said with tears of joy and relief, that they feel truly alive again!

Thank you all for your support and help in making a difference in the lives of the genocide survivors. The people trained are enthusiastic about being able to help and make a difference, and will be continuing to carry on the work in their ministries and counseling missions.