One of our aims is to support nurses who are working there and those who have lost their families and houses. One of our members, Dr. Nakahara, D.D.S., who works at the hospital is trained at the Diagnostic TFT level. She arranged our schedule and found that a nursing care facility, and a nursing school, around the hospital had lost many old people, workers, and some small children. She therefore arranged our support for them as well.

People who live in the affected area are quite traditional so there are very few psychiatric facilities, psychologists and counselors. CRT’s of psychological care were sent from other prefectures but gaining access in order to help was difficult because of the inhabitants’ stigma towards mental health care. Some shelters had signs on the doors, “No Counselors, No Media.” Even though trauma is a natural response to disaster, many people feel ashamed if they are cared for psychologically.

During our visits, and because of their reluctance to be treated, we felt it was too early to get in touch with the refugees in the shelters. However, the hospital found some people we could help and gave us a chance to visit shelters. We visited all six shelters in the town. 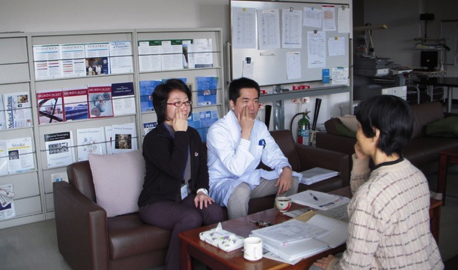 We were introduced as “meridian therapists,” so many old people thought we were acupuncturists. It was actually a good way to start. Many of the older people complained of physical pain. We were able to teach TFT mainly in small groups. Sometimes we taught it individually when they would start crying. The hospital planned my TFT seminar at night. More than 60 people joined, including public service people, doctors, nurses, teachers, and defense forces.

Many massage therapists offered body care while they listened to the refugee’s stories. “A man tried to hold all three of his children’s arms in the water but he could only hold onto one.” In another case, a woman told her she held on to her old father’s arm, but he left her by letting go saying, ‘go and be safe!.’ The therapists were having a difficult time sleeping after being told those stories so I showed them how to tap using TFT to give them relief and sleep.

During this visit we treated 5 individuals, 30 in a group, and 50 refugees. Although two elementary schools and one junior high school were destroyed by the tsunami, fortunately the children were safe. Nevertheless, the children saw the tsunami and some of them lost their family members. Since the schools want help, we are planning to send JATFT school counselors next time.

The city of Miyagi is about 400 kilometers (50 miles) from Tokyo. The roads were destroyed and only one highway was available. Everywhere we went there were heavy traffic jams. Dr. Tanekura and I drove cars and it took us 10 hours. I personally used Collarbone Breathing CB technique to help relieve my shoulder tension.

We at Japan ATFT really appreciate  ATFT. We thank you for your great assistance and warm support.