Since the year 2004, 10 years after the Rwanda genocide took place, April 7 has become an annual Day of Remembrance of the Victims of the Rwanda Genocide. The commemoration actually lasts the entire month of April and commemorates the deaths of 800,000 people who were murdered during the 1994 genocide. Celestin Mitabu is a TFT practitioner and trainer who is dedicated to relieving the suffering of his fellow Rwandans. The video above is a synopsis of how he and others helped heal trauma with TFT during the 2014 commemoration, the 20th anniversary of the genocide.

Following is a further description:

During the first week of the commemoration on 7th 4/2014 we send our team to Amahoro National Stadium to help people. Many of our therapist that served at Amahoro stadium are University Students survivals of the Genocide known as ARG. TFT–Have trained many of the ARG students and we have been working well with them and they are very committed to help people during this time.

We have a total number of 184 TFT therapists who helped people during this period of commemoration, and they have been giving me daily reports after every treatment. I have received many encouraging reports from practitioners….We are planning to have a common meeting at the end of the commemoration which will include all 184 therapists and we will hear testimonies because they treated many people and they have different testimonies. Some told me that after treatment some of the clients asked them contacts so that they will meet another time which to me is very good.

Sandrine told me that when she was treating some one in Nyamirambo Stadium there came a Medical Doctor working with the Ministry of Health he is an Egyptian man he was like confused while watching Sandrine practicing TFT until he told her to leave the client alone, but Nancy, who is in charge of Mental Health at the Ministry of Health, told Sandrine to continue and the results was positif at the end.

Last year during the commemoration, TFT started at the grass root level (Villages, Cells, Sectors, and Districts), but this year we started at the National level (National Stadium of Amahoro, Regional Stadium of Nyamirambo, and famer site of Nyanz Kicukiro among others). Last year, because we started at the lower level wherever we went, TFT controlled the treatment, but this year, because we started from the top and were mixed with different teams (Medical Doctors, Mental Health agent, different Humanitarian Organizations: Ibuka, CNLG, Haguruka, etc.), we all worked under the control and protocol  of the Ministry of Health. That is why, before starting to get involved in the treatments at the top level, we applied to the Ministry in charge and CNLG for recognition. And we did the TFT Campaign ahead of the treatment, and the campaign was taken to the Universities where you find people that are in charge of the Humanitarian work/helping.

Another great thing that we did during this first commemoration week is that  I taught TFT to two different Rwanda Community Radios: Musanze/Ruhengeri Community Radio and Rubavu/Gisenyi community Radio. Each Radio station gave me one hour and fifteen minutes. The topic was Trauma Control. At Musanze, I was interviewed by a journalist first to tell the listeners what TFT means and how it came about. Then how we do our activities and what are the results. Then I taught the Trauma Algorithm. I told them about the Major treatments of trauma, the 9G , 2 reversals, and how to set the SUD. Our listeners called us asking questions for help. They are still calling. At the end of the teaching, the chief Editor requested if we can have a permanent teaching on the Radio, saying the teachings are very relevant and appropriate to the event.

From Musanze/Ruhengeri we went to Rubavu, which is a different District, and we had the same teachings and the same methodologies, but we were interviewed by the Chef Editor and another Journalist. After teaching we were asked more questions by the Journalist and listeners–more than the first interview. At the end, the Chef Editor said to us it would be good for every village in Rwanda to have at least two therapist trained in TFT.

To us this is a great achievement, to spend 2hrs and 30 minutes teaching TFT on different Radio stations and have million(s) listening to us, especially that the teachings took place at 5:00 and 8:00, when everybody is at home after work relaxing.

Some of the pictures taken from the studio, it as still day time but the second teachings at Rubavu /Ruhengeri it was night and pictures are dork but the journalist who is working for our documentary told me that he will add light to those night pictures. 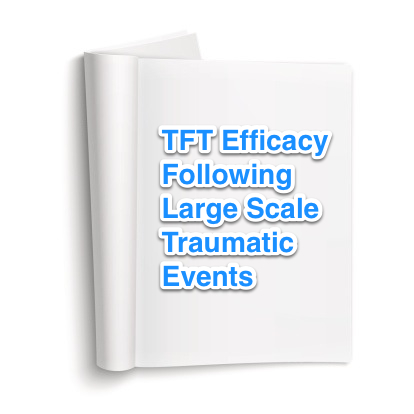 In a 2006 preliminary study, orphaned Rwandan adolescents, who reported ongoing trauma symptoms since the 1994 genocide, were treated with TFT. A 2008 Randomized Controlled Trial (RCT) examined the efficacy of TFT treatments facilitated by Rwandan Community leaders in reducing PTS symptoms in adult survivors of the 1994 genocide.

Results of the 2008 study were replicated in a second RCT in Rwanda in 2009. A fourth RCT in Uganda (in preparation for submission) demonstrated significant differences in a third community leader-administered TFT treatment. The studies described here suggest that one-time, community leader-facilitated TFT interventions may be beneficial with protracted PTS in genocide survivors.

To view the full article from Science Publications, click here.

The following is a case study submitted to Joanne Callahan as part of TFT-Dx certification:

Female in her mid 30’s: lost her son at the age of 4 due to a rare genetic disorder less than a year ago. It is coming up on the first anniversary of his death. He was completely dependent on his mother and was not mobile at all. Fed by tube feeding, suction machines and continuous 24/7 care. Diagnosis was given with an undefined outcome of not knowing what each day would hold and the outcome being death.

So her life was a ticking time bomb for 4 years.

Current condition: She was feeling anxiety and fear of not knowing, not knowing how she will cope with the first anniversary. Anger for losing her son in the first place, why did this happen to her??

Algorithms used – Complex trauma with anger and guilt and she went from a 10 to 3.5.

I then corrected for level two reversal and repeated the algorithms. Ending SUD was a ZERO- there was no feeling of anxiety when thinking of the first anniversary or thinking of his death.

We finished off with ER- Floor to ceiling eye roll.

Comments: Client B was nervous and found it extremely difficult to hum the tune of Happy Birthday in the beginning. She fought back tears and somewhat choking in her throat. Her SUD dropped steadily and with a great response.

I found that she was humming without a prompt and more ease, without me having to remind her to hum the tune. No evidence of PR or Apex problems and she was extremely open to the treatment and findings.

During the treatment Client was swaying from side to side, she felt at peace, light and carefree.

All truth passes through three stages. First, it is ridiculed. Second, it is violently opposed. Third, it is accepted as being self-evident. Arthur Schopenhauer

There is nothing more difficult to take in hand, more perilous to conduct, or more uncertain in its success, than to take the lead in the introduction of a new order of things. Niccolo Machiavlli

Trauma- informed care and practice is a framework for the provision of services for mental health clients that originated in the early 1990s and has especially been put forth as a sensible service model since Harris and Fallot’s 2001 publication Using trauma theory to design service systems. Trauma-informed care can be seen to be characterised by three main considerations in regard to the provision of treatment services:

In Australia these ideas were the focus of a consciousness raising conference: Trauma-Informed Care and Practice: Meeting the Challenge conducted by the Mental Health Coordinating Council in Sydney in June 2011. The conference was part of an initiative towards a national agenda to promote the philosophy of trauma-informed care to be integrated into practice across service systems throughout Australia.

It has only really been since studies such as END_OF_DOCUMENT_TOKEN_TO_BE_REPLACED

On Nov. 8, the Philippines experienced a devastating typhoon that left over 5,700 dead and more than 1,700 missing, with about 4 million people displaced. The TFT Foundation is very pleased that the blog now has instructions for the TFT trauma relief technique translated into the Filipino language, Tagalog. You will find it on the right side of this page, under Pages–Technique Instructions–Filipino/Tagalog. Many thanks to Maribeth Cowley for this translation! Please share it with anyone you know in, or having access to, the Philippines. With your help we can do much to relieve the severe trauma experienced by thousands of Filipinos. 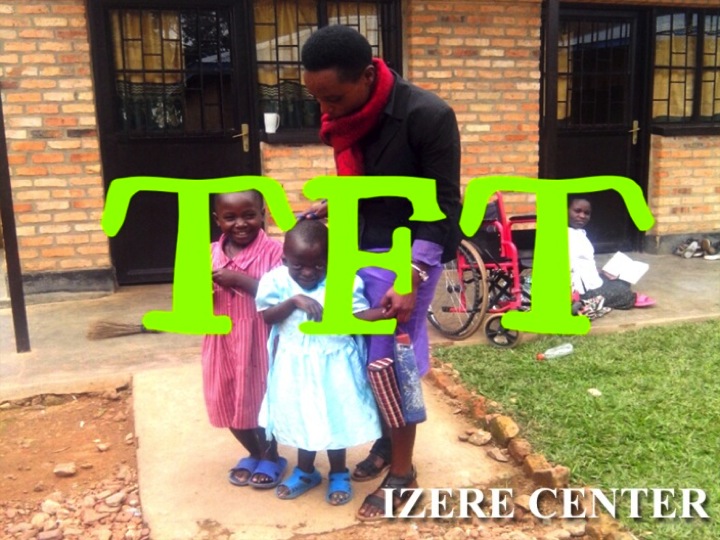 The following was written by Fr. Augustin Nzabonimana, director of the Izere Center, Rwanda, where TFT is used to relieve the suffering of those who have undergone horrendous trauma from the genocide, being orphaned, and other atrocities:

Discover the meaning of life using TFT!!!
TFT CAN MAKE YOU HAPPY!!!
Look how TFT Is helping the children with disabilities who live at Izere Center!

Many people we are treating at Izere Center come with depression, hopeless, angry and grief, with PTSD and extreme trauma,…! Somme time we need to lodge those who have an extreme trauma, fear and depression.

And, as Izere center is a social Center, we receive many cases to helped: Widows with low income, handicapped children, people with different incurable diseases, orphans,…

TFT is helping us to deal with all cases which need the high knowledge in psychology, sociology, theology and philosophy.

The pictures of the children who lie at Izere Center, I took them in different time after the long observation. It was no easy to see the happy and dancing. When they saw someone coming to them they went to hid themselves! 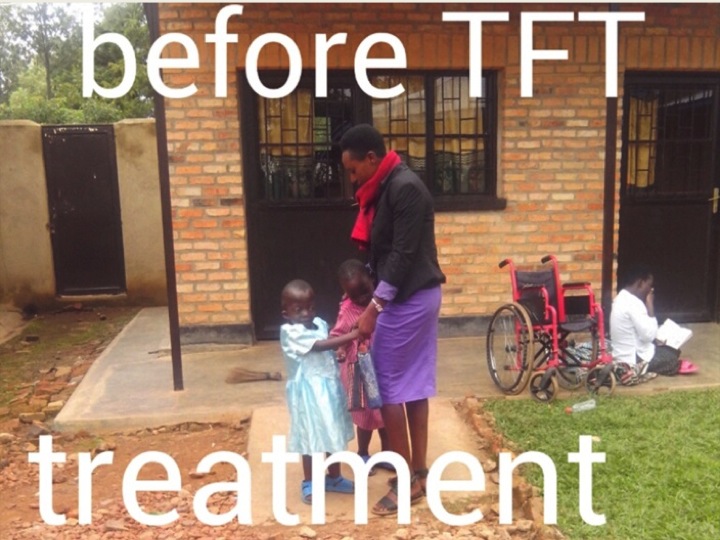 But now, when they have problem they go directly to see me, Adrienne or Betty to be treated with TFT.  And I was very happy to see them treat themselves!!! 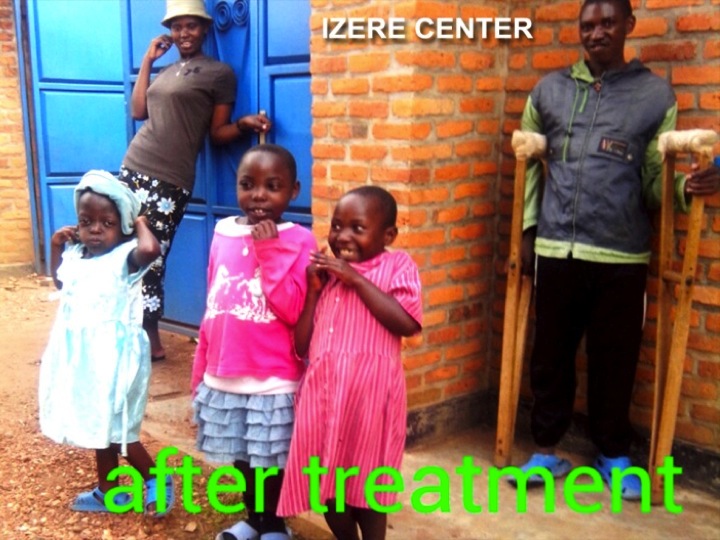 And I’m really happy to see my dear children friends dancing, singing and greeting  the visitors of Izere Center. Note that many of those children are orphans and handicapped. We feed them, lodge them and bring them at school. They are my best friends children!!!